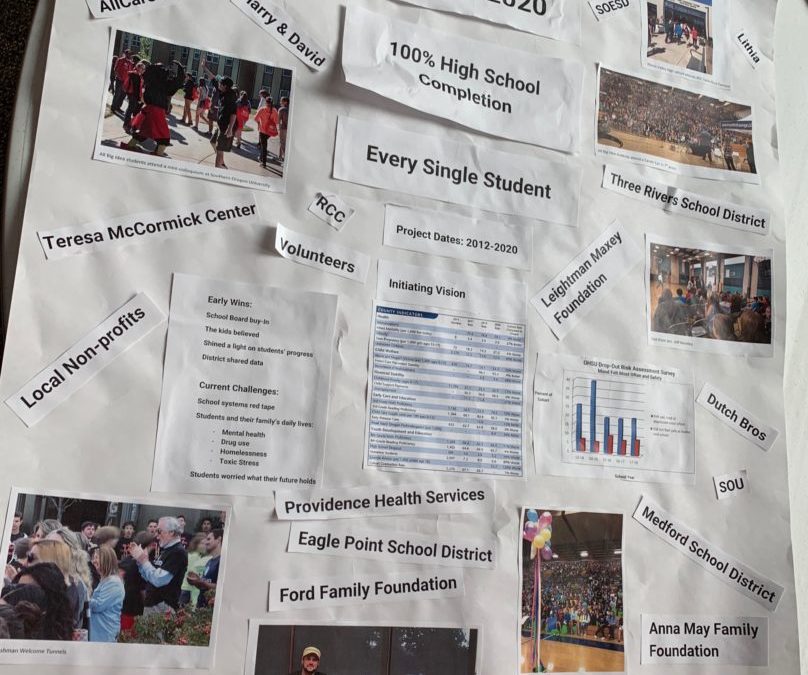 It’s been a long time since I blogged.  I make these commitments that I’ll do it Sunday afternoon or evenings.  I should keep that promise because it’s often when my mind is running freely.  Apparently so freely, I forget to blog…

Remarkably enough, we have arrived at Big Idea completion time.  The students graduate in June!  When we began our “homework” for what would become Big Idea – 100% High School Completion for the Class of 2020 in 2011, many people didn’t believe we’d stick with it for the long haul.  We’re here.  The kids are here and we’re seeing them through.  Not to 100% but a lot closer than before!

It’s time for a real update and for much gratitude.  Attached is a photo from a flip chart that shares how many partners we’ve had in this process although not all.  So many funders believed in the project including:  AllCare Health, Anna May Family Foundation, Ford Family Foundation, Jackson Care Connect, Leightman-Maxey Foundation, Lithia Cares 4 Kids and Providence Health & Services.  The districts were all in:  Medford School District, Eagle Point School District and Three Rivers District.  OHSU at SOU was amazing and surveyed the kids each year on drop-out risk.  This was an incredible partnership for Big Idea kids, United Way and OHSU at SOU.

The Southern Oregon ESD took a chance on a pilot project that has resulted in full time graduation coaches at Eagle Point and Illinois Valley High Schools!  Laura Porter and ACE Interface took the opportunity to develop a curriculum to teach the students at Eagle Point and Illinois Valley that their present or past doesn’t equal their future and even taught students brain health!  Gilda Montenegro Fix shared her wit, wisdom and grace teaching the students cultural agility.  The students knew the work; they didn’t have the vocabulary until Gilda spent time with them!  Teresa McCormick Center and Harry & David helped with thousands of pounds of fruit and healthy snacks for after school programs and I mean thousands – one year it was 16,000 pounds!

SOU hosted 1,100 7th graders for a field trip!  They were so amazing and divided the students into small groups and gave them all individual experiences for the day making college not seem like a dream but a reality.  RCC hosted the Illinois Valley students at the Table Rock campus to show how cool vocational education programs can be.

U.S. Senator Jeff Merkley spent time with the students and presented a flag that flew over Congress to the students.  My favorite question was “What made you think you could be a Senator?”  Senator Merkley’s answer was great.  He said he remembered being a student in middle school when a senator visited and he wondered the same thing.  Maybe there’s a future Oregon Senator in the Big Idea!  Let’s hope so; our future depends on it!

Dutch Bros. donated their time, treasure and talent to share a half-day session on leadership, passion and gratitude.  Those flamingo Dutch Bros. hats remain coveted swag!  And maybe, just maybe, the lessons sunk in too.

We had countless volunteers from one on one experiences to group welcome tunnels freshman year.  We are so grateful for their commitment to students and our collective future.  So many nonprofits in our community as well as small businesses stepped up with doctor visits, well child checks, sports physicals, eyeglasses, physical therapy and more.

I’ve learned so much.  If one shines a light bright enough, things change.  You all helped us to shine that light.  Thank you!  We have a plan for moving ahead and it’s not time for that.  It’s time to get these students successfully through high school.

As of last quarter, there are only 229 students off track with opportunities to improve that over the next two quarters!  This is amazing!  And you helped to make it happen!  Thank you!  Onward,